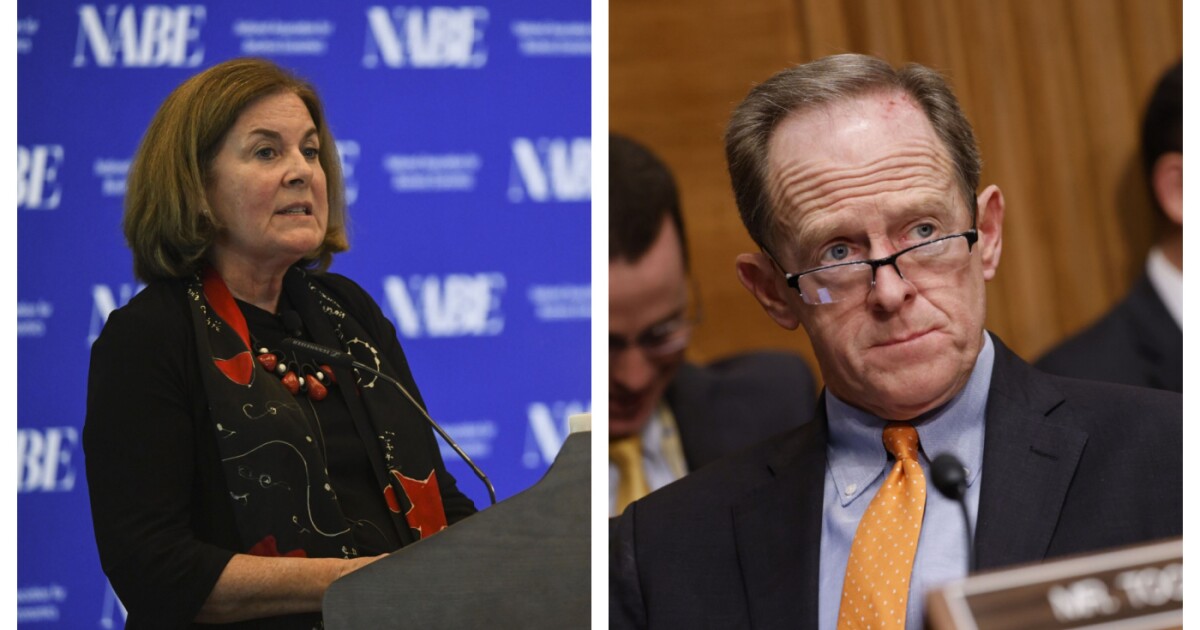 A Federal Reserve bank president is refusing to play ball with the Senate Banking Committee’s ranking Republican, setting up a potential showdown with Congress over how the central bank grants master accounts.

Esther George, head of the Federal Reserve Bank of Kansas City, shot down a request from Sen. Pat Toomey, R-Pa., for a briefing and documentation on the bank’s internal deliberation over the revocation of the master account granted to the payment services company Reserve Trust.

With George refusing to cede any ground in her 177-word response, issued late Thursday afternoon, policy experts and academics see a stalemate forming between the Fed and Congress, one that might need to be broken legislatively.

“It was one of the more terse responses to Congress that I’ve ever seen,” said one regulatory lawyer who requested anonymity to discuss matters related to the Fed. “Clearly she’s preparing for a fight.”

George wrote that the details Toomey sought constituted “confidential supervisory information,” because they involved private citizens and private companies, and therefore could not be shared. But some feel that classification is not quite up to snuff.

The Fed’s supervisory powers are clear for bank holding companies and national banks, which are members of Federal Deposit Insurance Corp. Those institutions must have Fed accounts, and therefore the Fed is granted supervisory authority. For companies such as Reserve Trust, said Julie Hill, a law professor at the University of Alabama, the Fed has been granted no statutory authority.

“They have supervisory authority over bank holding companies and members of the Federal Reserve, not state-chartered trusts,” Hill said. “So saying it’s confidential supervisory information is a bit of a head-scratcher for me.”

Still, Hill, whose academic work focuses on bank regulation and payments systems, is not surprised by the Kansas City Fed’s lack of cooperation. She has spent the past two years researching how banks gain access to the Federal Reserve’s payment system. Between her academic findings and her personal experience trying to obtain information through Freedom of Information Act requests, she noted that reserve banks are often able to avoid disclosing information.

“The reserve banks have always been secretive,” she said. “This is partly why we don’t know much about master accounts, because they occupy this odd space where they’re not really government entities, but they’re not really wholly private either.”

Other observers see reserve banks as having no statutorily granted discretion over which state-chartered institutions should be given master accounts. Aaron Klein, senior researcher at the Brookings Institution, said any company with a state charter should have a right to a master account upon request.

“Independence requires accountability,” he said. “The Kansas City Fed’s treatment of master accounts has been problematic for many years, particularly with respect to cannabis in Colorado. If the Kansas City Fed is not accountable to Congress for regulatory decisions, then to whom are they accountable?”

On Twitter, Peter Conti-Brown, a professor of financial regulation at the University of Pennsylvania’s Wharton School of Business, said it was striking that George provided no additional context given the Kansas City Fed’s stark reversal on Reserve Trust. In February, the Kansas City Fed defended its earlier decision to grant the company a master account, issuing a statement that Reserve Trust met the definition of a depository institution and was assessed on a variety of risk-based factors. It is unclear what changed in the following four months.

“This kind of blanket denial of information to a member of Congress on so bizarre an episode, on the basis of confidential supervisory information, is very troubling,” Conti-Brown said.

The exchange between Toomey and George comes as pressure mounts on the Fed to modernize its master account practices to factor in state-by-state differences in chartering cryptocurrency companies, fintechs and other nontraditional businesses.

The questions of how master accounts should be meted out and how transparent that process should be have been thrust into the spotlight by recently introduced legislation, a high-profile lawsuit and the political controversy surrounding Reserve Trust, which was previously the only known fintech with a Fed master account.

Reserve Trust’s master account became a point of contention in February during the Senate Banking Committee nomination hearing for Sarah Bloom Raskin as the Fed’s vice chair of supervision. Raskin, a former Fed governor and deputy Treasury secretary, served as a board member for Reserve Trust from 2017 to 2019. During that time, the Colorado-based company was granted a master account at the Kansas City Fed.

Asked if she intervened on behalf of the company, which had previously been denied a master account, Raskin testified that she did not recall. Republicans on the Senate Banking Committee refused to allow a vote on any of Biden’s Fed nominees until Raskin answered questions about her time at Reserve Trust. Raskin ended up withdrawing from consideration.

George’s brief response to Toomey is unlikely to be the last word on the subject. The senator has already made it clear that he wants to implement some measure of reform to how reserve banks operate and how they are held accountable before he leaves office at the end of the year.

The Fed’s Board of Governors is already looking to put guidelines in place regarding how certain institutions are evaluated for master accounts. Its most recent proposal would provide the easiest access to federally insured and supervised banks, a slightly more difficult path for banks only supervised at the state level and the most scrutiny for unsupervised organizations.

The matter of which banks get master accounts could be resolved by a bill introduced by Sens. Cynthia Lummis, R-Wyo., and Kirsten Gillibrand, D-N.Y. The sweeping proposal, which would provide a regulatory framework for a variety of digital assets, calls for all state-chartered banks to be given master account access. Like Klein, the senators maintain that this approach is in line with how the law is already written.

Hill said both interpretations of the law — that reserve banks have broad discretion over which institutions should have access to Fed’s payment system and that they have no say whatsoever — have flaws. But, she said, the real issue is a lack of clarity into the process.

“The only way that you have consistency across reserve districts and even within reserve banks is if you have some transparency,” Hill said. “I would think that the folks that are concerned about master accounts in general ought to be concerned about some level of transparency. Otherwise, they can’t ever be assured that the folks that they want to get master accounts are being treated fairly.”

Whether greater transparency is adopted independently by individual reserve banks, called for by the Board of Governors or mandated by an act of Congress could come down to how deep George and Toomey dig in their heels over Reserve Trust.