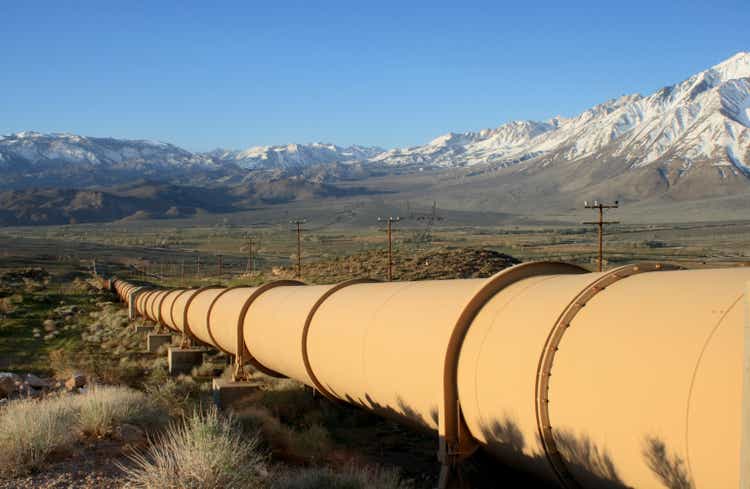 The following segment was excerpted from this fund letter.

Equitrans Midstream Corp. is a new long position for the Partnership. ETRN is the former midstream arm of Marcellus natural gas producer EQT. They own gathering assets (small diameter pipelines that directly connect to the wellhead) and long-haul transportation assets (larger diameter pipelines that move gas over long distances, usually under take-or-pay contracts).

The company formally separated from EQT via spin-off in late 2018. At the time, the capital structure was pretty complicated – there was a collection of three (yes, THREE) publicly traded currencies that held various ownership interests in the core assets, but this was simplified in a combination of asset swaps over the years so that there is now only one publicly traded vehicle (ETRN).

The stock has been a poor performer since its separation due to missed financial targets and increasing debt-levels, both owing to the company’s struggle to complete the Mountain Valley Pipeline (MVP). The MVP is intended to provide much needed takeaway capacity from the Appalachian Basin to markets in the U.S. Southeast (where there is growing gas demand for power generation) as well as the Gulf Coast (for eventual export). The project has been an utter disaster for the company because of continued opposition from the environmentalist community.

Originally targeted to come online in late 2018 at a total cost of $3.5 billion, today we’re looking at a best-case scenario of mid2023 at a total cost of $6.2 billion. In support of the expanding price tag, ETRN has had to take on increasing amounts of debt. At the same time, the company has pulled the rug out from under dividend-oriented investors, first in the form of revised guidance for no growth vs. 8-12% at the time of separation, and second in the form of a (backdoor) dividend cut. So, it’s sort of easy to see why investors have been sour on the stock.

The Partnership began acquiring shares in late June / early July when ETRN was trading around $6.00. As a general matter, I disdain using DCF for valuation purposes, as it’s a silly exercise that involves a lot of bullshit guessing about the future. But there are exceptions to every rule, and ETRN is one of them. This is a business that is fairly simple to model. Certain volumes are contractually set.

The way I went about modeling the business was as follows: First, there is a “core” or “base” business that will generate cash flows independent of MVP being placed into service. Second, there is a set of “contingent” cash flows that will be generated in the event of MVP being placed into service. Applying a 10% (equity) discount rate to expected free cash flow from the base business yielded a price in the low-to-mid $6.00 range.

So, at our purchase price, I felt comfortable we were able to lock in an attractive return with limited downside. At this level, we also became the owners of an “option” on potential upside from the contingent cash flow stream. At the time, I estimated upside from this cash flow stream to be worth anywhere from $3.50-$4.00. Of course, the “option” is worth less than that (because of the probability tree associated with MVP), but at $6.00/share, we were getting the option for free. Who doesn’t like a free option?

Since initially establishing a position, there has been a major development with respect to the prospects of MVP. In exchange for his support of the proposed “Inflation Reduction Act,” West Virginia Senator Joe Manchin secured commitments from congressional leadership and the President to support a bill that would, among other things, clear a path for MVP to be completed. As it stands today, the market appears to be pricing in roughly 50/50 odds of completion, but I think the probability is much higher.

What could go wrong? The biggest risk to completion is no longer judicial, but political. The path forward for the legislation that would support MVP’s completion is a “side agreement” to the reconciliation bill. This means it can’t pass with a simple majority, and instead needs a filibuster-proof 60+ votes. Republicans are a tad salty about the Democrats’ recent legislative success((es)) and I wouldn’t put it outside the realm of possibilities that they thwart the legislation out of pure spite. Time will tell, but given our purchase price, I think it’s highly unlikely that we end up losing money on our position even in the event of a “worst case” scenario.

Editor’s Note: The summary bullets for this article were chosen by Seeking Alpha editors.

Editor’s Note: This article discusses one or more securities that do not trade on a major U.S. exchange. Please be aware of the risks associated with these stocks.