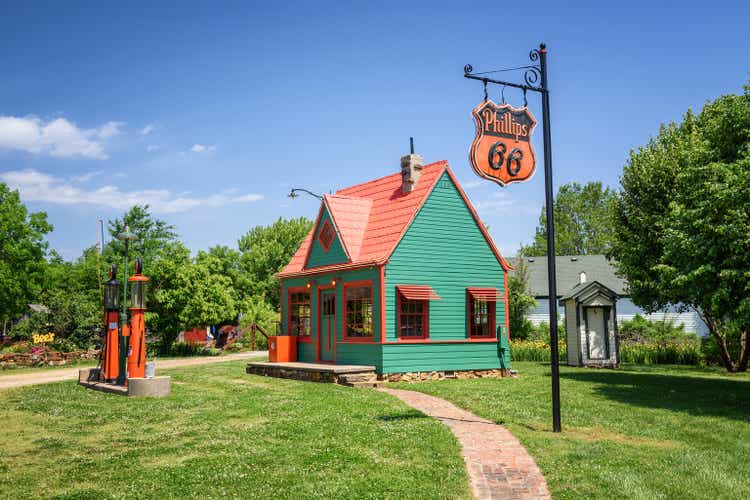 Last week, Phillips 66’s (NYSE:PSX) new CEO Mark Lashier made a big move to significantly increase the company’s stake in DCP Midstream (DCP) – one of America’s largest natural gas gathering & processing companies and a significant producer of NGLs (see graphic below). This is likely part of a long-term strategy to position PSX and Enbridge (ENB) to fully dissolve its DCP 50/50 joint venture. This makes a lot of sense for both companies. PSX is a leading logistics company with substantial NGL demand pull for its large-scale Gulf Coast fractionation & chemicals facilities. That being the case, it can more fully integrate DCP’s NGLs production into its value chain. It also makes sense for Enbridge because the extra working interest in the Gray Oak pipeline it received will give it a bigger share of Permian & Eagle Ford producers’ oil transported directly to ENB’s Gulf Coast export terminal. That is, the Gray Oak pipeline is a much better fit for Enbridge’s liquids pipeline business as compared to NGLs gathering and processing. In effect, the transaction will allow both companies to do what they do best and align their long-term strategic interests. Or, to use an old saying, “stick to their knitting”.

The first announcement was that PSX had already increased its economic interest in DCP Midstream from 28.26% to 43.31%. PSX will oversee and control the JV’s interest in DCP Midstream, LP as the General Partner. In return for the increased economic interest in DCP, PSX’s handed over a 35.75% interest in the Gray Oak Pipeline to Enbridge – which will manage the JV’s interest in Gray Oak Pipeline. Phillips 66 also had to pony-up ~$400 million of cash for Enbridge. That’s a drop-in-the-bucket for PSX considering the company had $2.8 billion in cash at the end of Q2, a net debt-to-capital ratio of only 29%, and generated strong free-cash-flow during the quarter on a recovery in refining. Not to mention that in Q2 alone PSX had an adjusted net profit of $3.285 billion or $6.77/share.

The announcement said the transaction is expected to be accretive to earnings. The resulting changes of the merger post-transaction are shown below:

As can be seen in the above graphic, both companies increased their economic interest in what they do best: PSX has a bigger interest in NGLs and Enbridge has a bigger interest in a liquids pipeline. However, note that both companies maintain various interests that would need another transaction to fully unwind the DCP JV. That brings us to the second transaction, with is a further move toward what I believe is the final goal for both PSX and ENB: completely dissolve the DCP JV.

If PSX is successful in buying up the 43.49% of DCP LP units held by the investing public, that would bring its total stake in DCP’s LP to 86.8%. At that point, PSX would own the vast majority of DCP LP units (and control of the GP) while ENB already owns the majority of the Gray Oak Pipeline, LLC and controls its GP. That being the case, once PSX buys up DCP’s public units, it’s not hard to connect the dots and assume PSX & ENB will then likely agree to a final transaction to effectively dissolve the JV by PSX taking over all of DCP and Enbridge taking over PSX’s stake in Gray Oak. Note, this comes on the heels of PSX recent roll-up of is PSXP MLP. Clearly, PSX is attempting to “clean house” and become a simpler and more efficient company.

Analysis Of The Transaction

First of all, it’s a shame PSX couldn’t make the deal during the COVID-19 downturn, when DCP Midstream was trading significantly below where it is today. However, PSX’s balance sheet was stressed due to the drastic drop in refined product demand. In addition, the 50/50 DCP JV with Enbridge means that both parties had to agree on a transaction, and I doubt ENB would have sold its interests in DCP at a deep discount during a down-market.

Secondly, two things are obvious: PSX is gaining more exposure to commodity pricing in two ways: 1. via its increased ownership in DCP’s NGLs production and 2. decreasing its stable fee-based interest in the 900,000 bpd world-class Gray Oak pipeline. Enbridge is doing the exact opposite: reducing its commodity price exposure via DCP and increasing its fee-based interest in Gray Oak. Effectively, I would argue that PSX is taking on more risk while Enbridge is taking on less risk. Meantime, both companies are aligning their strategic interests going forward. That is especially the case considering PSX’s Frac 4 is should come online late this quarter and, as a result, PSX will need an addition 150,000 bpd of NGLs feedstock.

From a high-level view, the transaction appears to be more beneficial to Enbridge as it receives increased interest in Gray Oak, which connects the Permian and Eagle Ford shale plays directly to the Enbridge Ingleside Energy Center (“EIEC”) export terminal on the Gulf Coast. The EIEC currently accounts for ~30% of all North American oil exports. And this move strengthens Enbridge position on the Gulf Coast. ENB also receives ~$400 million in cash from the deal, which will be immediately accretive to ENB’s distributable cash-flow per share. Meantime, ENB’s cash flow will be a bit more stable now that the commodity price risk related to DCP has lessened.

However, note that PSX’s pretax net-income from DCP in Q2 was $130 million, based on its previous 28.26% economic interest. Had the company had its current 43.31% stake, all things being equal, the pre-tax net-income from DCP would have been an estimated $199 million. Sure, it was a strong quarter for DCP, but that helps to put the $400 million payment to Enbridge into better perspective.

The market reaction to the transaction was clear last week:

As can be seen in the graphic, PSX significantly under-performed its refining peers Valero (VLO) and Marathon Petroleum (MPC) despite a strong week for the refining sector. The transaction didn’t seem to move the needle much for Enbridge while DCP Midstream was the clear winner for obvious reasons. Note DCP closed Friday at $38.18/unit, significantly above PSX’s $34.75/unit offering price.

I don’t understand the market’s muted response with respect to Enbridge, which in my opinion should have moved higher on this news. The Gray Oak is a world-class pipeline, ENB just received $400 million, and a further unwind of the JV looks highly likely in the relatively near future.

Phillips 66 has been severely under-performing its refining peers for quite some time. That wasn’t supposed to happen after the company diversified into supposedly higher-margin midstream and chemicals assets, which now equate to a bit more annual EBITDA than does PSX’s refining operations. Unfortunately for PSX shareholders, I think the DCP bid is going to put a ceiling on shares until completion of the deal and another earnings report (or two) demonstrates the benefits of the transaction. Longer-term, I think the deal makes a lot of sense for PSX, but in the short-term it’s a win for Enbridge.

On the bright side, PSX has a higher distillate yield as compared to its peers, and as a result is killing it on diesel margin (see PSX: Buy The Dip Prior To Q2 Report). In addition, Sweeny Frac 4 is expected to start-up late this quarter and will add an additional 150,000 bpd of capacity. Phillips 66 currently trades at a TTM P/E=7.5x, yields 4.4%, and will be on the receiving end of considerably more distributions from DCP going forward. That being the case, PSX looks like a value here. However, I rate PSX a HOLD because investors may get an opportunity to buy shares even more cheaply before year-end, especially if it has to up its bid to acquire DCP (which is not a given).

Meantime, current consensus estimates are for PSX to earn $14.30/share this year and over $10/share next year.

I’ll end with a 5-year price chart of PSX versus Valero, MPC, and Enbridge: