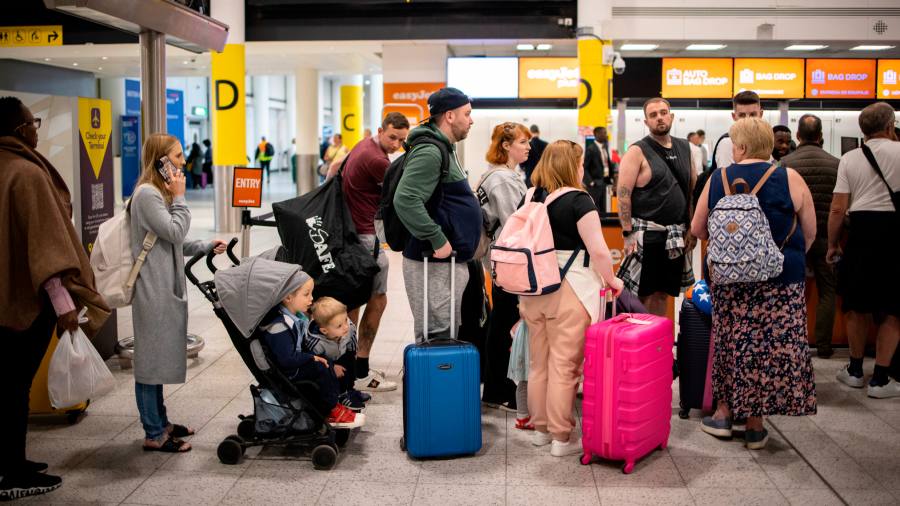 London’s Gatwick airport has warned that economic uncertainty threatens the aviation industry’s recovery from the pandemic as it forecast rising passenger numbers after a fraught summer of disruptions.

The UK’s second busiest aviation hub on Tuesday said it expected 32.8mn people to pass through the airport in 2022, up from the 30.6mn it forecast in March.

Gatwick warned its upgraded passenger forecast could be affected by “macroeconomic uncertainty — including inflationary pressures on costs and passenger demand for the winter season”.

Unlike Heathrow, Gatwick has avoided extending a cap on flight numbers, introduced in the summer to combat disruption, despite strains in capacity because of a surge in bookings as travel restrictions eased.

The airport cut its maximum number of daily flights to 825 in July and 850 in August, down from the 900 that airlines planned to operate at peak times, after a wave of last-minute cancellations and delays because of staff shortages.

The airport hired an extra 400 security personnel in response, and diverted its own staff to stretched ground handling companies, subcontracted to provide services from check-in to baggage handling.

Short-notice cancellation rates fell from 1.8 per cent of flights in late May to just 0.1 per cent in early August.

“We are now very much operating business as usual and do not see any reason to extend the capacity declaration,” said Gatwick’s chief executive Stewart Wingate.

In contrast, Heathrow, the UK’s busiest airport, has extended a similar cap until the end of October because of continued staff shortages among ground handlers, leading British Airways to cancel hundreds of flights.

Gatwick reopened its south terminal in March after mothballing it for nearly two years, a difficult period that resulted in heavy losses as some big airlines consolidated operations at Heathrow.

Passenger numbers at Gatwick reached 81 per cent of 2019 levels in July, up from 27 per cent in January, with an increase in flights that the airport said was “unprecedented” compared with other large European competitors.

“We still have some way to go, but strong demand has fast-tracked Gatwick’s recovery from the pandemic,” Wingate said.

The airport returned to profit for the first time since the start of the pandemic in the first six months of the year, after it reported profit after tax of £50.6mn, compared with a £244.6mn loss over the same period in 2021. Revenue rose nearly sixfold to £291.5mn.

Airlines are facing rising costs including high fuel bills that analysts expect will need to be largely passed on to customers through higher fares.