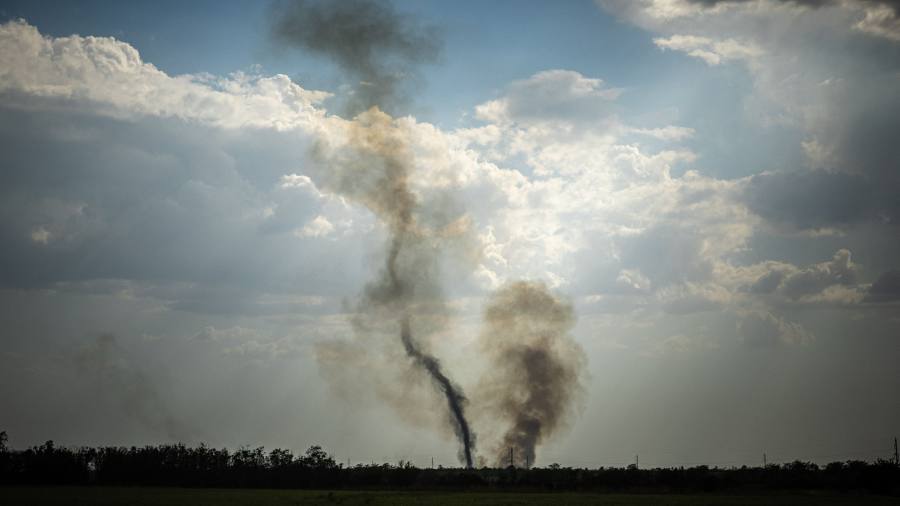 Ukraine has begun its counter-offensive in southern Ukraine, territory that Russia seized in the early weeks of President Vladimir Putin’s full-scale invasion, despite Kyiv’s complaints that the army lacked sufficient heavy western weaponry to make a decisive strike.

President Volodymyr Zelenskyy’s stated aim is to recover Kherson, a regional capital with a strategic position on the Dnipro River that Russian forces captured in March after they swept north from Russian-held Crimea.

Operational details remain sketchy amid a near-total Ukrainian news blackout. Russia has provided little more information, except to say that its invasion is still going to plan. But as of Wednesday, three days into the attack, Ukraine claims to have broken through Russia’s first line of defence around the city of Kherson.

The recapture of the region would bring major military benefits to Ukraine. It would dash Russian hopes of extending its occupation of Ukraine’s southern Black Sea coastline up to the key port of Odesa. It would also mark a Russian defeat that even the Kremlin might find hard to mask.

According to a Ukrainian military adviser, the offensive has already had a strategic success. It has forced Russia to deploy troops south away from its offensive in the eastern Donbas region. That has complicated Ukraine’s Kherson offensive but recreated the multiple fronts that failed so spectacularly for Russia when it launched the full-scale invasion more than six months ago.

Ukraine is adopting unusual military tactics in its counter-attack. An estimated 30,000 Russian troops are deployed throughout the Kherson oblast. But instead of taking them on with a sweeping second world war-style manoeuvre, Kyiv plans to corrode their will to fight by choking Russian supply chains and lines of retreat through a mix of careful missile, drone and artillery strikes, partisan resistance and close combat.

This scrappy approach avoids the destructive artillery barrages and missile strikes that Russia used to take cities such as Mariupol with such high cost to civilian lives.

Ukraine’s preparations for the offensive also began more than two months ago, with a precise series of rocket, artillery and drone strikes launched on Russian supply lines and military infrastructure, some of it as far behind enemy lines as Crimea. Strikes on the Antonivsky bridge at Kherson and at Nova Kakhovka further upstream have particularly increased the vulnerability of Russian supplies.

“It may take a series of efforts, but it’s the end result — the return of Kherson to Ukrainian governance — that matters, not how it looks,” said Andriy Zagorodnyuk, a former defence minister and chair of the Centre for Defence Strategies think-tank. “To do it successfully is more important than doing it quickly.”

Even if the offensive does not achieve its full military objectives, it will confer important informational benefits, analysts said. These include boosting Ukrainian morale and showing the country’s western allies that the funds and weapons they have supplied are a winning bet worth adding to.

In addition — and crucially — the initiative is meant to broadcast to Moscow that its plans to annex Kherson and other occupied territories through staged referendums, as it did in Crimea in 2014, are doomed because Ukraine will not stop in its efforts to recover them.

The US state department said on Tuesday that it expected Russia still planned to stage sham referendums in occupied areas so as to claim that Ukrainians wanted to join Russia.

“The political and informational aspects of the offensive are really important,” said Anthony King, professor of war studies at Warwick university. “Even if the maximal military goals aren’t achieved, after being on the defensive for so long for Ukraine to just have the confidence to go on the offensive is useful.”

Success is far from assured. Although Ukrainian forces have led a superb defence since Russia’s partial invasion of the country in 2014, they “have very limited or almost zero experience of [conducting] large-scale offensive actions”, said Sergii Grabskyi, a reserve colonel in the Ukrainian military in an interview on the Geopolitics Decanted podcast.

The army also remains short of the heavy western weaponry such as artillery, tanks and US-made Himar missiles that have been central to its recent military successes.

“Ukraine still is not seeing the amounts of weapons any where near the ballparks that it has been discussing” with its western allies, Zagorodnyuk said.

Compounding the difficulties, Russian forces have begun to dig into defensive positions around Kherson that will be hard to take. Some of them these soldiers are understood to be crack paratroopers. Russia still retains a massive artillery advantage over Ukraine.

Even so, the ratio of Ukrainian troops to Russian in the area is “much better in terms of equality or parity . . . than they were” in the Donbas, a spokesperson at the US defence department said on Tuesday.

There is also a precedent of Russian forces beating a hasty retreat when they realise that they cannot win, as happened after their attempt to take Kyiv and north-eastern regions of Ukraine failed in March.

A tipping point could come if Ukrainian troops surround the thousands of Russian soldiers that are all but stranded on the western bank of the Dnipro River. Ukrainian missile strikes have already worked to close off their supplies and escape routes by rendering the two bridges to the eastern shore essentially unusable.

“Russians fear looking weak, and will prefer to retreat than accept defeat — just as they did earlier in the war,” said the Ukrainian adviser. “Or they may not, in which case we will move into close combat in a final push.”