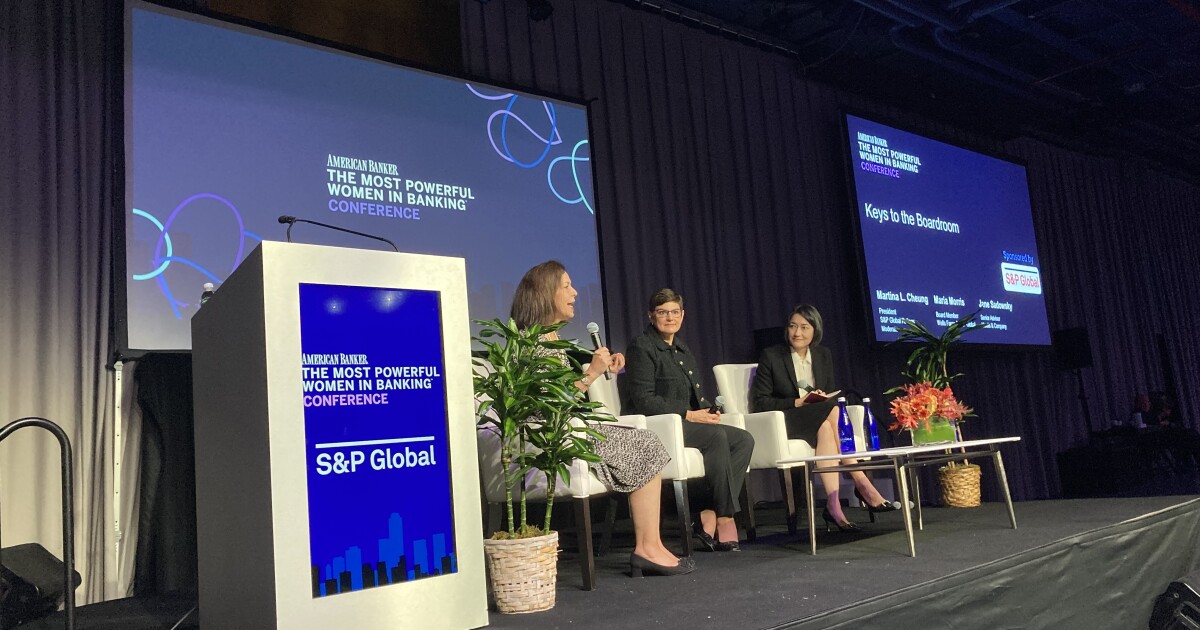 When Jane Sadowsky began her career in finance in the 1980s, women on boards were a rare oddity. “It wasn’t discussed. It wasn’t done,” she said.

Things have changed since then, as her own career shows. Sadowsky, who worked as an investment banker at Citi and Evercore before becoming a senior advisor for diversity and inclusion at investment bank Moelis & Company, is also serving on the boards of two metal mining companies and a private equity-owned company.

But it’s still not easy, as “board refreshment is not as rapid as any of us would like to see” this year, she said.

Sadowsky shared tips in a panel last month for women to land the highly sought board seats that Wall Street had closed off to them in the past. Sadowsky was joined by Maria Morris, who retired from her insurance executive career at Metlife and is now a board member at Wells Fargo and S&P Global Ratings. Martina Cheung, president of S&P Global, moderated the conversation at American Banker’s Most Powerful Women in Banking conference in New York.

Cheung began the session by reviewing a poll of attendees at the conference, which showed that 45% of bankers surveyed said they were currently on a board. Yet when asked if they were planning to join a board, 83% said yes, suggesting a gap for women in finance between wanting to join a board and being able to.

“We don’t have a supply problem,” Sadowsky said, looking around the room and noting that it had around 200 eligible women leaders. Instead, it’s a matter of limited openings, she said.

Citing research that she said would come out at the end of the year, Sadowsky said in 2022 there were only around 400 board seats “refreshed” or made available out of around 5,000 seats among the S&P 500 companies.

“Approximately half of those go to outside search, and half of those go into the network that board members and their social networks already have. So we’re looking at 200 seats in any given year for the S&P 500,” Sadowsky said.

IPOs and SPAC activity, which would otherwise have created board seats, also dried up this year. And in the landscape of ongoing mergers and acquisitions, each of those deals also shrink the number of board seats by half, Sadowsky said.

In the meantime, for a woman banker or financial services professional who wants to join a board, below are five tips the panelists shared on how they did it, and what they learned from being on boards.