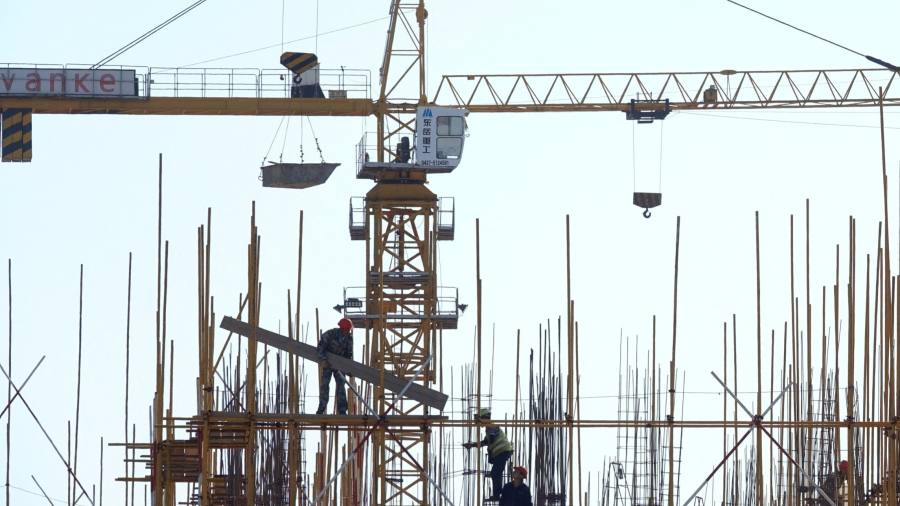 China’s state-owned banks have launched a concerted effort to strengthen the finances of the country’s struggling property developers, with more than Rmb220bn ($30.7bn) being announced on Wednesday in new credit lines.

Bank of Communications, China’s sixth-largest bank by assets, was the first to announce support, agreeing a Rmb100bn credit line for Chinese developer Vanke and Rmb20bn for Midea Real Estate, in a clear sign of greater government support for stronger players in the real estate sector.

Bank of China, the fourth-biggest bank in China, later announced it would offer another Rmb100bn credit line to Vanke, while the Agricultural Bank of China, the country’s third-largest lender, said it would also offer credit lines to five developers — Vanke, China Overseas Land and Investment, China Resources Land, Longfor and Gemdale — but did not reveal any figures.

Industrial and Commercial Bank of China, the country’s biggest bank, is also considering a credit line package in the dozens of billions to developers, including Longfor and Country Garden, according to domestic media reports. ICBC did not immediately comment.

More state bank credit offerings to developers would be announced in the coming days, said one person familiar with the situation, who said the moves were aimed at showing strong state support for easing the liquidity crunch being experienced by developers.

The state banks’ loans are the first significant offering to developers after regulators decided on a support package last week that was widely interpreted as a turning point for the sector. The 16-point property relief measures were officially published on Wednesday.

The industry has been plagued by construction delays for more than a year after liquidity issues at Evergrande, the world’s most indebted real estate company, spread across a sector that contributes more than a quarter of the country’s economic activity.

Support for Vanke, one of China’s largest developers and one of the few to retain an investment-grade rating, indicates the opportunities for survivors in a market where sales are still sinking and projects remain incomplete.

Vanke’s fate contrasts with that of Evergrande, which defaulted last year along with a host of its peers including Kaisa and Fantasia and struggled to obtain any new financing. The company, which has liabilities of around $300bn, is in the middle of a drawn-out restructuring process and has not provided a clear plan to investors.

Authorities have hinted that the market is divided between strong and weak players. On Monday, the head of the country’s securities regulator, Yi Huiman, said China needed to implement plans to improve the balance sheets of “good-quality” property developers and “pay close attention to the difficulties and challenges facing the property industry”.

Along with its Rmb100bn loan to Shenzhen-based Vanke, BoCom offered up to Rmb20bn to Midea Real Estate, a real estate arm of Chinese home appliances giant Midea Group, and another player that has avoided the serious liquidity issues seen elsewhere in the market.

Midea Real Estate said in a statement that the loan agreement showed “recognition and trust from mainstream banks and authorities”.

Shares of Vanke added as much as 2 per cent in Hong Kong, while those of Midea Real Estate gained as much as 3 per cent on Wednesday.

The support package from the People’s Bank of China and the China Banking and Insurance Regulatory Commission had urged banks to roll over their loans to the property sector and provide builders with more time to complete unfinished projects.

The regulators also extended banks’ deadlines for capping property sector loans and asked them to differentiate the credit risks between individual projects and developers. Analysts viewed this as guidance that allowed more credit offerings, not only for unfinished housing projects but for developers reeling from a cash crunch.

S&P, the rating agency, said this week that the government was “taking bolder steps to restore confidence in the sector”.

Previously, the support measures were all “aimed at keeping developers alive long enough to complete millions of pre-sold homes”, analysts wrote. “Now the focus is on allowing these developers to become a going concern — to buy land, build, grow and prosper in the future.”