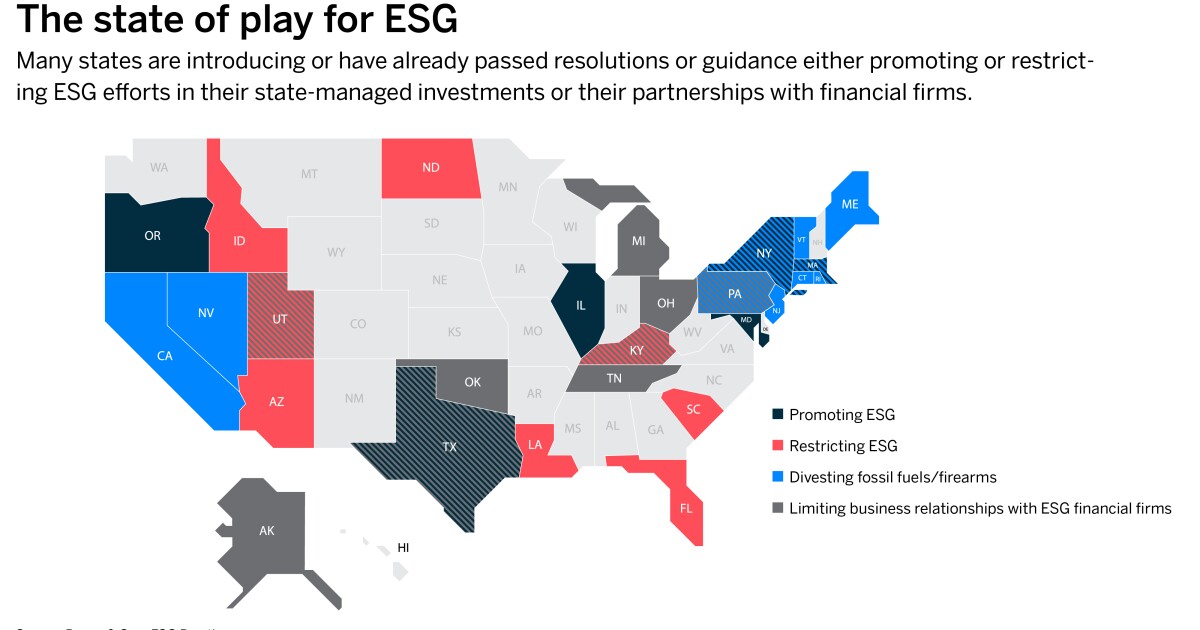 WASHINGTON — In the absence of a red wave in the 2022 midterms, Republicans are turning to states and other local governments to make the kind of changes they want to see on environmental, social and governance policies in the banking industry.

Republicans failed to flip the Senate in the midterm elections and will have to wait another two years for a shot at the White House, meaning that any anti-ESG legislation in Congress is unlikely to pass. Rep. Patrick McHenry, R-N.C., the presumptive future chair of the House Financial Services Committee, is expected to question Securities and Exchange Commission Chairman Gary Gensler on the agency’s efforts to police climate disclosures at public companies, but that kind of oversight is about as far as leadership in that panel will allow.

At least some of those races that flipped cited ESG policies in their races. Kansas state Rep. Steven C. Johnson, who beat  incumbent Treasurer Lynn Rogers to become Kansas’ next treasurer — a position that serves on the board of the $24.8 billion Kansas Public Employees Retirement System — said in a campaign news release that “eliminating woke ESG investment strategies” was central to his campaign.

And in a number of states, legislation that would limit the degree to which banks and other financial institutions can engage in ESG investing is pending. State-level elections will have a large impact as to whether those bills or measures will move forward, and that will impact which banks and financial firms can be involved in those states’ pension funds as well as other public retirement funds and state investment arms.

Democratic-controlled states, meanwhile, are pushing back. On Monday, a group of attorneys general wrote to the heads of banking congressional committees, saying that ESG measures provide a holistic view of investments to consumers, rather than the investments being politically motivated.

“Where the midterm will have the most effect is who got elected at the state level,” said James McGinnis, counsel in the asset management group at Ropes & Gray and former adviser to McHenry.

Other experts agree: Across the board, experts are looking at the results of officials elected to state-level positions rather than congressional ones to assess the future of ESG investing and how it could impact banks.

“Maybe not so much on the congressional level, there are efforts on the state level that might be more impactful,” said Amanda Rose, a law professor at Vanderbilt and an expert in securities law. “It will be interesting to see whether other red states adopt their laws and to what degree they have an impact.”

Laws that already exist in some states provide a window into what could be coming in other red ones: In Texas, the state’s comptroller Glenn Hegar, a Republican, released a list of 10 companies and 348 investment funds that would be barred from doing business with the state because of their ESG efforts. Some of those companies include Wall Street giants like BlackRock, Credit Suisse and UBS.

In West Virginia, the state has barred five major financial institutions, including Goldman Sachs and JPMorgan, from doing business with the state because it says the firms have stopped supporting the coal industry.

And while these are relative outliers right now, other states are considering similar measures. In Louisiana, Missouri and South Carolina, for example, state treasurers have announced certain divestitures based on the ESG views of a manager.

Although there’s little chance of anti-ESG legislation coming out of Congress in the next two years, policy watchers still expect Republicans to press the SEC’s Gensler, as well as bank CEOs, on the issue, particularly on the agency’s climate disclosure rule.

“The bully pulpit does not just reside at 1600 Pennsylvania Avenue, it resides in the power of the chairman as well,” said James Ballentine, founder and CEO of Ballentine Strategies and former lobbyist for the American Bankers Association. “I think you’re going to see several letters to companies asking very direct questions as to how they arrive at a particular position.”

Republicans are expected to use their position in House leadership to continue ratcheting up the rhetoric around ESG investing. Last week, Rep. Andy Barr, R-Ky., told bankers at the Consumer Bankers Association Washington Forum that consumers should “want to see neutrality in the way their banks operate.”

“Banks should be credit and capital allocators to creditworthy borrowers,” he said. “They should not be picking winners and losers in the marketplace based on political ideology. And so when you talk about wokeness in the financial services sector, you’re going to hear Republicans talk about environmental, social and governance as a cancer within our capital markets.”

This is a topic that Republicans are expected to push for the next two years, and into the next presidential election, said Peter Montgomery, a managing director at Right Wing Watch who’s written about the Republican backlash against ESG investing. That’s because it fits neatly into the Republican focus on culture wars, even if it creates a schism between Republicans and their traditional business, and banking, allies.

“There’s this larger trend on the American right moving from this libertarian economic approach to a more authoritarian one where they are explicitly interested in using the power of government institutions to enforce what they call traditional values on society, including on business,” Montgomery said.