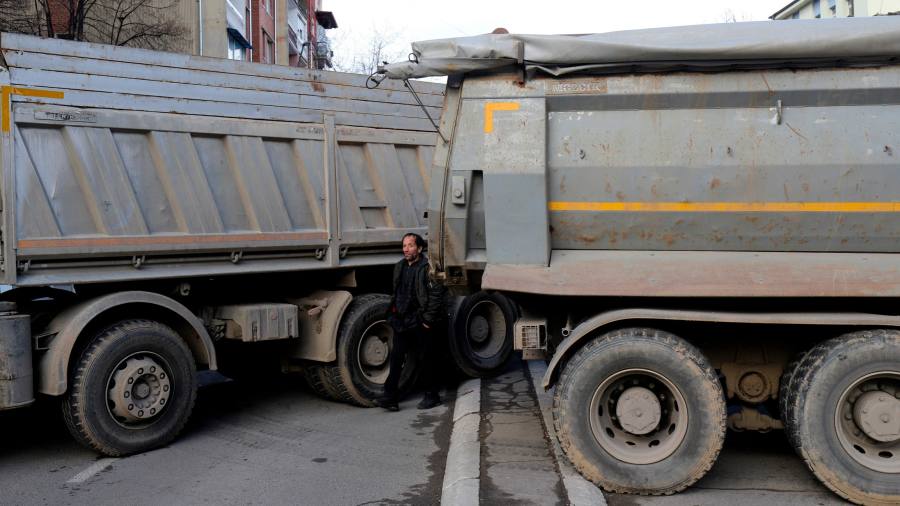 Kosovo closed its main border crossing with Serbia on Wednesday as months of tensions between Belgrade and its former western Balkan province threatened to spill over into conflict.

Serbia put the military forces it has sent to the border with Kosovo on the highest state of combat alert and Belgrade threatened to step in to defend ethnic Serbs if international peacekeepers could not defuse the tensions, which stem from a dispute over the issuing of car licence plates by Pristina.

Serbian president Aleksandar Vučić on Tuesday accused Kosovo of preparing to attack ethnic Serbs in the north of the country and vowed to “protect our people [in Kosovo] and preserve Serbia”. Protests by ethnic Serbs against Pristina’s authority, including walkouts in government offices and the installation of roadblocks in and around cities along the border, have continued for weeks.

Belgrade has said it will never recognise its former province, which unilaterally broke away from Serbia in 2008, as a sovereign country. Both sides appear serious about the possible use of force to resolve the issues, analysts say, with the international community’s control over the situation weakening in recent months.

“The chance for confrontation is real,” said Milos Damnjanovic, a regional expert with the Belgrade-based BIRN consultancy, adding that Belgrade had stopped gently pressing Kosovo Serbs to accept some degree of integration.

“[Kosovo premier Albin] Kurti appears to think the he can use force to impose integration on Kosovo Serbs without giving anything in return,” he added. “The risk is doubly real because Belgrade is backing northern Serbs to resist being integrated on Kurti’s terms.”

After months of talks including several meetings of the countries’ leaders with US and EU diplomats, a solution was deferred until next year and both sides agreed to undertake measures to safeguard peace.

But after hundreds of ethnic Serb police and government workers quit their jobs rather than administer the reforms urged by Pristina, the resulting security vacuum prompted the Kosovo government to press for an immediate solution and threaten to dispatch its own forces if the issues could not be peacefully resolved.

Ethnic Serbs perceived that as a threat and the ensuing protests became highly volatile, with barricades going up across northern regions of the former Yugoslav province and shots occasionally fired, although there have been no reports of fatalities or serious injuries.

Pristina asked the KFOR international peacekeeping mission, which has just under 4,000 troops on the ground, to help it remove the roadblocks and added Kosovo would do it on its own if KFOR could not.

“Serbia, influenced by Russia, has raised a state of military readiness and is ordering the erection of new barricades in order to justify and protect the criminal groups . . . in Kosovo,” Kosovo interior minister Xhelal Sveçla said late on Tuesday after new barricades in the northern city of Mitrovica were erected overnight.

Serbia denies it is trying to destabilise Kosovo or has links to criminal groups in the country.

With Moscow one of Belgrade’s biggest allies, Russia’s full-scale invasion of Ukraine gave the west a sense of urgency to resolve the Kosovo issue. Renewed conflict in the region would greatly reduce the prospects of the countries joining the EU and Nato and threaten European unity as the Ukraine conflict continues.

“Serbia is defending the rights of Serbs who live nearby in difficult conditions. Of course, they react severely when these rights are violated,” Peskov said on Wednesday, according to Interfax. “Russia follows what is going on and how Serbs’ rights are ensured very closely, and we support what Belgrade is doing.”

In an effort to defuse tensions, a Kosovo court said on Wednesday that Dejan Pantic, a former policeman whose arrest fuelled the current protests from his fellow Kosovo Serbs, would be released from custody and placed under house arrest. Pantic was held in early December on charges of assaulting a serving police officer.

Vučić on Tuesday said Serbia would “continue to fight for peace and seek compromise solutions”.