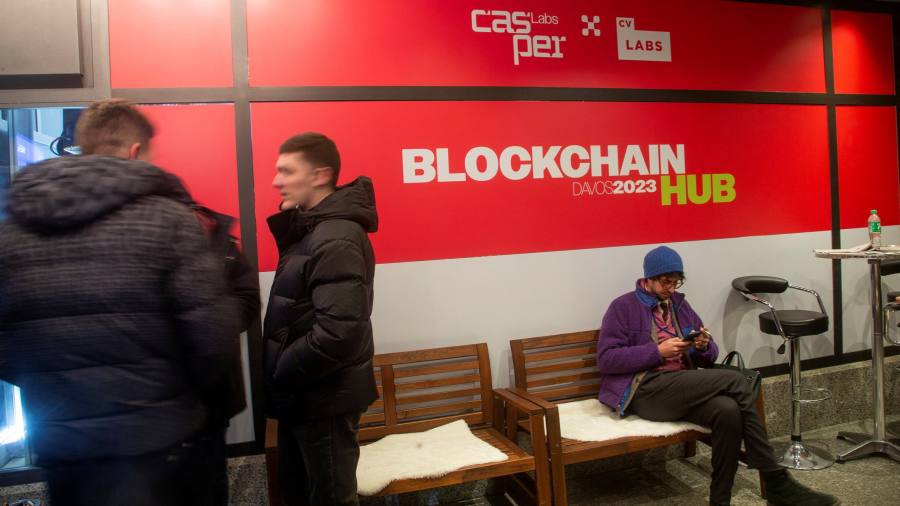 A resilient band of top crypto executives returned to the World Economic Forum in Davos, but without their trademark swagger, suggesting the spectacular failure of trading platform FTX has sent a chill through the industry.

At the previous Alpine gathering of the WEF in May, crypto operators snagged the top slots on the busy main street leading to the congress centre, leaving little space for attendees to avoid the hard sell on tokens and digital art.

But a crash in prices, a series of bankruptcies and accusations from US law enforcement authorities that now defunct FTX crypto platform conducted one of the “biggest frauds in American history” have forced the industry to play it safe.

“It’s a big contrast from May,” said Brooks Entwistle, managing director at blockchain-based payments company Ripple. “Last time, crypto dominated the Promenade. It was everyone you know, every company you know. Now a lot of people are not here.”

The period between May and January has been “traumatic”, Entwistle said, and has heightened sensitivity among regulators and central banks around deepening any links with crypto operators, even those working on nitty-gritty payment systems and staid central bank digital currencies rather than on get-rich-quick coins.

Ripple itself is awaiting the conclusion of a long running US regulatory investigation into its XRP token, which has been identified as a possible unregistered security. Entwistle says he expects that process to conclude in the first half of this year, and that his firm is still in growth mode.

But the legal charges facing FTX and its disgraced founder Sam Bankman-Fried are hanging heavy over every operator left in this space. “Everybody is a bit paranoid,” Entwistle said. “FTX takes up the first 30 minutes of every conversation.”

Even despite the failure of the terra and luna tokens in early May 2022, crypto executives at the event later that month were ebullient, with many seeking to find buyers for their coins. Around half of the shop fronts on the Davos Promenade were crypto related. A panel session inside the congress centre itself was called “The Future of Crypto: The View from Miami”, featuring the mayor of the city. A series of pop-up galleries featured non-fungible tokens, or NFTs, whose value has evaporated over the past nine months.

Tether, which runs a so-called stablecoin and claims to be backed one-for-one with dollar reserves, handed out free slices of pizza. There was no obvious sign of the company in January. Other no-shows include network Polkadot, and FTX itself. Most marketing focuses tightly on the humdrum world of payments and potential applications for crypto’s blockchain technology.

Binance chief executive Changpeng Zhao spoke at a side event, but only remotely. A roughly half-hour interview hosted by blockchain company Casper Labs was light on hard hitting questions for the chief of the world’s largest crypto exchange and the interview soon turned to his food and music tastes.

“I try to listen to all the bands that are into crypto,” Zhao revealed, adding that he “enjoys almost every kind of food”.

Stablecoin and payments specialist Circle was out in force, but treading a careful line. “Now is a moment to really try and differentiate a lot of things,” chief executive Jeremy Allaire said at an event hosted by the FT. “I can differentiate between people speculating on ‘shitcoins’ and meme coins from durable public infrastructure that’s being built on the internet. There’s a hot mess of stuff that was cooked up. We have to focus on utility.”

Banking executives also underlined the distance between their operations and some of the more fanciful and fragile elements of crypto. Robin Vince, the newly appointed chief executive of BNY Mellon, said his bank would be sticking with its digital assets units. But, he stressed, “crypto is a tiny component of that”.

Instead, his interest is in blockchain technology. “[That technology] is not proven. But it’s probably going to be quite interesting over the course of the coming years. Maybe it will take five years, maybe it will take a decade. We need to see it proven out a little bit more, but if it’s going to be a new, better way of holding records on financial instruments, we’re the world’s largest custodian. We absolutely have to have a stake in that journey.”

Crypto optimists broadly agreed that potential buyers of the coins or users of the technology have short memories, and that the market can bounce back.

Lending some weight to this claim was a lighted display on the Promenade from an outfit called Crypto Castle. “Escape the hell of controlling banks and governments”, it read. “To a regal home for cypherpunks.”