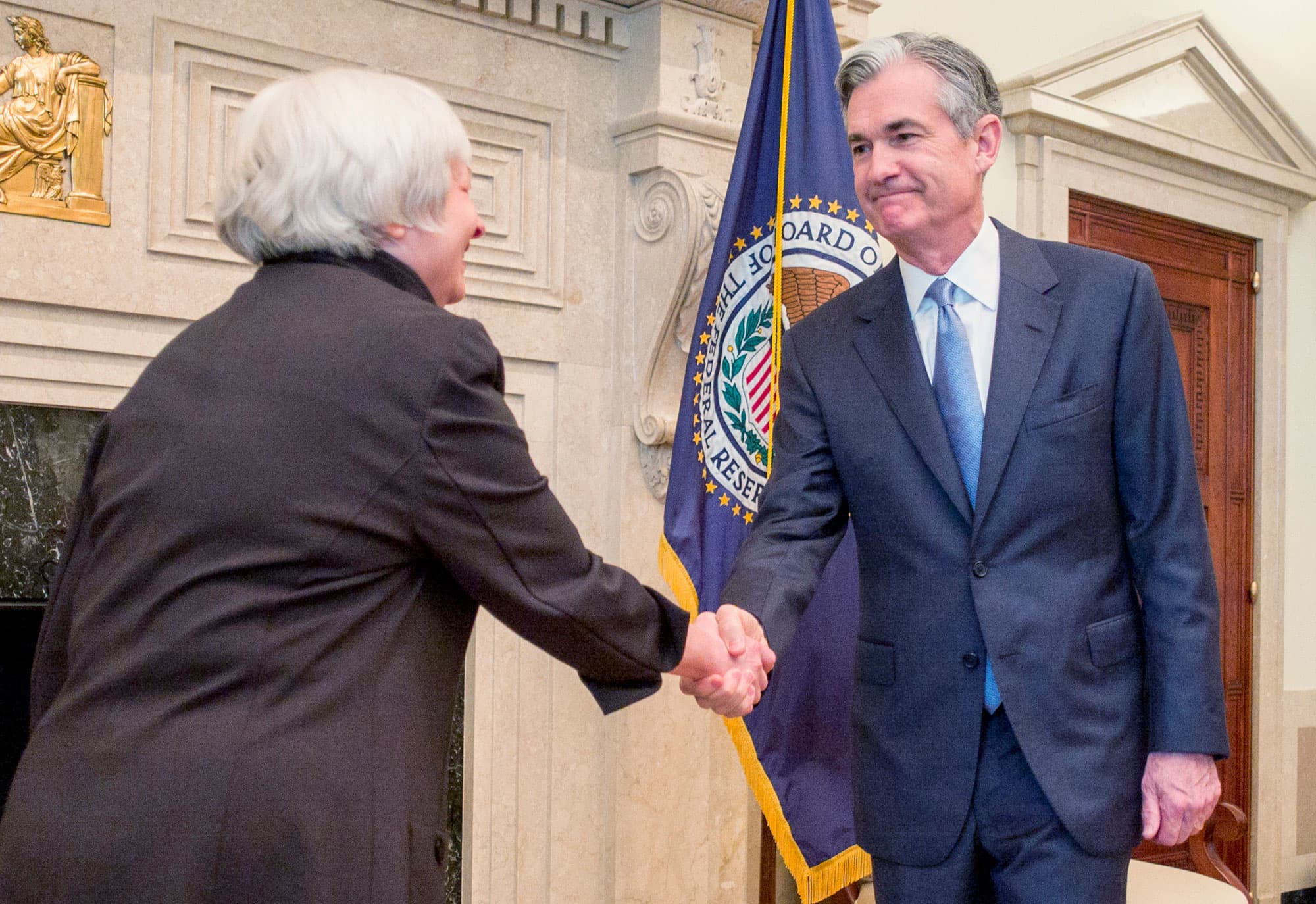 Federal Reserve Chair Janet Yellen (L) congratulates Fed Governor Jerome Powell at his swearing-in ceremony for a new term on the Fed’s board, in Washington in this handout photo taken and released June 16, 2014.

Treasury Secretary Janet Yellen on Thursday offered high marks for the Federal Reserve and how central bank officials navigated the U.S. economy throughout the coronavirus pandemic.

Yellen told CNBC that the Fed has “done a good job” in recent months under the direction of Chairman Jerome Powell. Yellen led the central bank until her term expired in 2018, when former President Donald Trump opted to appoint Powell, a Republican.

Asked whether she would support Powell for a second term as Fed chairman in the midst of rising inflation, Yellen deflected.

“That’s a discussion I’m going to have with the president,” Yellen said during an interview that aired on CNBC’s “Closing Bell.”

“I’ve given you my own personal views on inflation,” she continued. “I have a lot of respect for the Federal Reserve. And it’s important for them to make independent judgments about what’s appropriate.”

While they oversee different aspects of U.S. economic policy, Yellen and Powell have for the most part been in agreement over Congress’ efforts to stimulate the American economy in recent months.

As Fed chairman, Powell has been reluctant to weigh in on fiscal policy, but he urged lawmakers throughout 2020 to provide additional support for workers and businesses struggling during the pandemic.

Yellen has been outspoken in her support for further spending in the form of a massive infrastructure deal and President Joe Biden’s American Families Plan.

With Powell’s term set to expire in 2022, Biden faces a tough decision: Stick with former investment banker Powell or select a more progressive nominee to further focus the Fed on issues such as climate change and income inequality.

Powell has generally received positive reviews during his first term as Fed chairman.

Perhaps most impressive was the speed with which Powell and his colleagues embarked on, and successfully instituted, emergency lending and liquidity programs to stabilize the U.S. economy in spring 2020.

Though the U.S. economy did see its unemployment rate hit double digits and gross domestic product growth swoon 31.4% in the second quarter of 2020, economists and lawmakers alike credit the central bank for preventing a more severe crisis.

Powell concluded two days of testimony on Capitol Hill on Thursday, when he told lawmakers that the Fed is monitoring a pickup in inflation and that the U.S. banking system remains strong.

“I want to begin by thanking you, once again,” Sen. John Kennedy, R-La., told Powell on Thursday morning. “We all remember well the spring of 2020, when the world economy almost melted down. It didn’t in substantial part because of the actions that you and your colleagues took. You kept this thing in the middle of the road. Now, some days you had to do it with spit and happy thoughts, but you kept it in the middle of the road.”

The Fed continues to purchase $120 billion a month in Treasury or mortgage securities as part of that effort, and it’s kept interest rates near zero since the pandemic began.

Powell has also proved to many that he remains resistant to political pressure, an important trait for the leader of a government institution designed to make monetary policy decisions independent of partisan whims.

Though nominated by Trump, Powell was often the subject of ridicule by the former president, who frequently blamed his Fed chief for less-than-perfect economic growth.

Trump in 2019 compared Powell and his impact on the economy to a “golfer who can’t putt” and insisted, to little effect, that central bank officials keep interest rates low. In tweets, then-President Trump also claimed the country is “doing great with China and other Trade Deals” with “the only problem” being Powell.

Federal Reserve has done a ‘good job’ under Powell